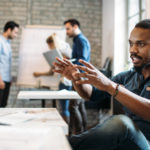 Though it’s finally starting to cool down, this summer was the hottest on record in the Northern Hemisphere. In both July and August, large parts of the United States experienced heat waves that brought temperatures near and above 100 degrees F for days on end. If you live in these areas, you may have gotten notices like this one from DTE Energy in Michigan that recommended several actions including drinking more water and checking in on neighbors, particularly those with disabilities or who are elderly. You also may have gotten notifications that you should try to limit your air conditioner use to reduce strain on your local electrical grid.

As many of us know, heat waves are becoming more frequent and intense in the U.S. and represent one of the many ways that climate change will impact us in the coming years. Thus, what we do in our day-to-day lives — our personal and household behaviors — will play an important role because ultimately, we are our own first responders when these impacts hit home. As this recent heat wave also shows, we can’t just look out for ourselves but must also look out for each other.

When most of us think of the term “behavior” in the context of environmental problems, we usually think of simple actions like recycling and turning off lights — actions that we know are not enough. When it comes to adapting to climate change, there is much more that people can, and must, do. Personal and household adaptation behaviors generally fall into three main categories: protecting oneself and one’s family, managing mental health impacts, and engaging with others.

Adaptation professionals can take additional steps to provide resources for personal adaptation. This includes not only providing places for people to go during climate impact events (e.g. cooling centers and resilience hubs) and informing people about these resources, but also can include ongoing engagement activities such as citizen science programs to map heat impact inequities and training residents to become climate action advocates for their communities. Many more actions are possible and will need support. Climate change adaptation is an ongoing process, and one that both adaptation professionals and the general public will be dealing with for decades to come. The good news, however, is that there is a lot that we can do.